You are here: Home / Christianity / Bono on Christian belief

Is he or isn’t he? Christians have long discussed whether or not U2 frontman Bono is in fact a believer. Of course its not really our place to judge. Bono is certainly to be admired for his advocacy on behalf of the poor and sick. Here are some comments regarding his Christian beliefs in general. Sounds like he’s been reading some CS Lewis, which never hurt anyone. If you want to read more, I found the excerpts at Jeffery Overstreet’s blog (with an assist from David Price)
—- 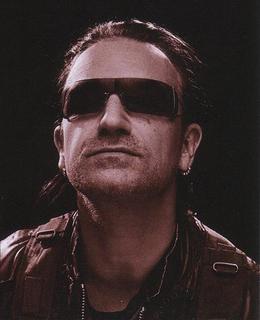 “I think that’s normal. It’s a mind-blowing concept that the God who created the Universe might be looking for company, a real relationship with people, but the thing that keeps me on my knees is the difference between Grace and Karma…

“You see, at the center of all religions is the idea of Karma. You know, what you put out comes back to you: an eye for an eye, a tooth for a tooth, or in physics—in physical laws—every action is met by an equal or an opposite one. It’s clear to me that Karma is at the very heart of the Universe. I’m absolutely sure of it. And yet, along comes this idea called Grace to upend all that “as you reap, so will you sow” stuff. Grace defies reason and logic. Love interrupts, if you like, the consequences of your actions, which in my case is very good news indeed, because I’ve done a lot of stupid stuff.

“That’s between me and God. But I’d be in big trouble if Karma was going to finally be my judge. I’d be in deep [email protected]*t It doesn’t excuse my mistakes, but I’m holding out for Grace. I’m holding out that Jesus took my sins onto the Cross, because I know who I am, and I hope I don’t have to depend on my own religiosity.”
Sounds pretty good, eh? In fact if you read on Bono sounds like a Christian apologist:

“No, it’s not farfetched to me. Look, the secular response to the Christ story always goes like this: he was a great prophet, obviously a very interesting guy, had a lot to say along the lines of other great prophets, be they Elijah, Muhammad, Buddha, or Confucius. But actually Christ doesn’t allow you that. He doesn’t let you off that hook… So what you’re left with is either Christ was who He said He was—the Messiah—or a complete nutcase… The idea that the entire course of civilization for over half of the globe could have its fate changed and turned upside-down by a nutcase, for me that’s farfetched.”