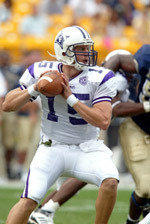 Well it’s about time to get revved up for college football season. There is nothing quite like it – you can keep the NFL. While I have my favorite Division 1A teams (Georgia, FSU, Louisville), my true allegiance is to my alma mater, Furman University. Now the phrase “Furman football” may not evoke much in your mind, but it is fair to say that the Paladins are consistently a top-25 team in the smaller scholarship world of Division 1-AA. We’re in the playoffs nearly every year, last played in the title game in 2001 and last won it in 1988. (The biggest reason to like 1AA football is that you hear the phrase “title game” and “playoffs” every year. Yes, like every other NCAA sport besides 1A football and its bloated bowl system, 1AA has a real champion.) The Southern Conference is by far the powerhouse conference and that nation’s toughest.

Anyway, I say all that to break the news that Sports Illustrated ranked us #1 in its preseason 1AA rankings! The rankings are based on the return of Ingle Martin at quarterback, who set records with his performance last year after transferring from Florida.

—
By the way, the Louisville Cardinals, who finished ranked 6th last year, are expected to hit the BCS this year, and have a legitimate shot to go undefeated through the Big East schedule.