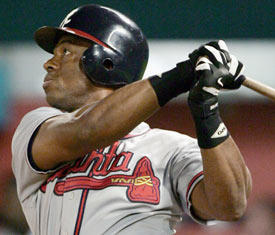 Julio Franco, the ageless wonder, turns 47 years old today. He is a decade beyond the age when most athletes have reached the end of their careers, yet Franco remains a key contributor to the division-leading Atlanta Braves. Pete Rose played until the age of 45, but he hit .219 that last year – Franco is batting at his career average around .300. When he hits his next home run, he will officially be the oldest person in the history of Major League Baseball to do so. He already holds many “oldest to” records (see sidebar in this interesting article). When the Braves signed him from a Mexican league in 2001 (at the age of 43), most people around baseball literally laughed at the desperation of the Braves. In a year largely defined by the unlikely success of a bunch of rookies, Franco single-handedly raises the median age of the club to a more normal level. In fact, several of the new Braves (Jeff Francouer, Brian McCann, and a couple of others) were not yet born when Franco first broke into the big leagues in 1982.

At that time Franco was a wild child off the field, and a talented shortstop on it. His first manager, Pat Corrales, now a coach with the Braves, admits he wondered if Franco would even live to see 37 because of his wild lifestyle and arrogance. Now Franco is well known for his deep seeded Christian faith (he became a Christian in his early thirties) and his unbelievably disciplined work ethic. He supposedly is in the best physical shape of anyone on the Braves roster. And his presence is much appreciated for what he contributes both on and off the field. He wants to play until he is fifty years old, and then hopes to coach or manage.