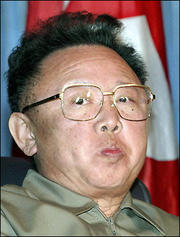 But come on – according to the government (who would never deceive the beleagured masses), the guy is a prodigy at everything he’s ever tried. For example, he’s the most naturally gifted golfer on the planet. The “Dear Leader” hit eleven holes-in-one the first time he ever played golf. He has piloted jets and written operas. His memory is unmatched by anyone. All of this information and more is apparently available on the government’s website (OK I can’t read Korean, and I’m guessing you can’t either, but read about it here.) I mean, who wouldn’t revere a guy with hair like that?