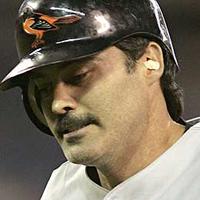 No doubt that by now you’ve heard about Rafael Palmeiro, who emphatically told Congress that he had never used steroids, only to test positive this season. (By the way, we may also conclude that he is not the sharpest knife in the drawer to keep using them after all the off-season exposure and the promise of better testing this year.) Since coming back from his suspension he has stunk it up on the field, and has rightly been catching a lot of flak from the fans. Well, now he has taken to wearing earplugs in order to not have to listen to the fans. Pitiful.