You are here: Home / sports / The X Games 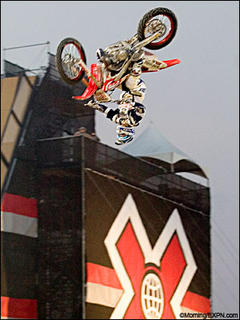 When we weren’t working on the house (more on that later), we spent some time this weekend watching the 11th X Games from LA. I have to admit that, though I never owned a skateboard or tried any tricks on my bike, I love watching the X Games. In fact there are few things on television that I find more entertaining. The stuff that these guys pull off is just amazing, and the 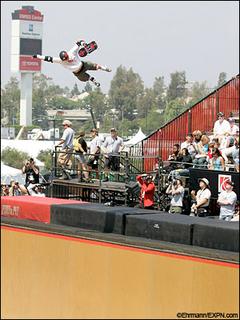 ir bravada (my mom would say insanity – heck I’d say insanity many times) is impressive. There is something thrilling about watching a guy roll down a steep 8-story grade on a skateboard and fly through the air as he wheels his board around. It’s exciting to watch some nutjob on a motorcycle fly through the air and do a flip or let go of the handles and fly parallel to the bike.

Here in Louisville we have our very own city extreme sports park. I once was down there with a few friends who used to skateboard. There were a couple of pros out there riding that night. What impressed me most was the speed – seeing them in person gives you much better appreciation for how fast they’re moving through that half pipe.

Anyway, not that you’ll be seeing me out there anytime soon. Nor should you plan on seeing our son out there competing in Moto Best Trick or something crazy. We’ll plan to stick with soccer. But for those who are willing and able, I’d love to watch.