You are here: Home / apologetics / From CCM to Prison: What We Can Learn From Tim Lambesis

Tim Lambesis was the frontman and leader of a Christian metal band called As I Lay Dying… until he was arrested for trying to hire a hit man to kill his wife.

The case garnered a lot of headlines. Shortly before he was sentenced, Lambesis participated in the first, and maybe the last, interview about what happened.

It’s a tale of hypocrisy, drug use, and infidelity, with possible hints of redemption. And there are a few things here worth considering:

Lambesis makes some claims and statements that may reverberate through the world of Christian music (CCM) generally, and Christian metal specifically. Like this:

It’s one of those things you hear whispers about sometimes. Just because the label on the music says “Christian,” can you really know that it is Christian music? Does it matter?

Both are valid questions. 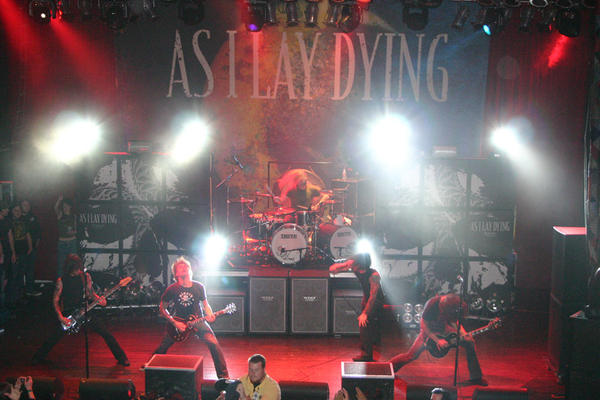 sense, it bothers me that we have to put a “Christian” label on art (music, literature, whatever) as a sort of litmus test. Art should be about beauty; and beauty is properly something that draws us back to the Creator. But we know this isn’t always so, and that our culture’s definition of “beauty” is not always… beautiful.

As a parent, I have a greater understanding of why people want to identify music as “family friendly.” In some sense, I suppose labels are helpful.

Lambesis says as much:

If you say, “This is what I believe, you can count on this. If you believe the same things, I’m on your team.” A lot of Christian parents said, “Yes, you can buy this As I Lay Dying CD, because they’re a Christian band.” They don’t even think to actually check the lyrics.

But we still need to be discerning. To twist a cliche, you can’t judge an album by the label.

How did Lambesis lose his faith?

How does one move from leading a “Christian” band to atheism, steroid use, infidelity, and possible murder-for-hire?

One step at a time. It began when his faith was challenged, and it didn’t hold up.

I was a philosophy major in college. I thought it was something I’d enjoy that would help me grasp what people are thinking in order for me to help people better understand Christianity. I thought I would learn how to defend the faith…

I switched from philosophy to religious studies… I’d get three pages of the traditional evangelical conservative point of view, then three paragraphs or sometimes even just three sentences from the atheist perspective. But even in just a few sentences, I’d think, “This point of view makes more sense,” even when it wasn’t being well represented. In the process of trying to defend my faith, I started thinking the other point of view was the stronger one.

Elsewhere, Lambesis mentions attending a Christian high school, so it seems reasonable to think he was raised in a Christian home. This kind of story is nothing new – there are too many people who lose their faith when it is challenged in college.

I believe that, in many cases, young people raised in a Christian environment don’t really know what they believe or why – they simply assent to what they are taught without thinking it through. They have not necessarily been instructed in what it means to have a Christian worldview, in why doctrine and theology matters, and they probably aren’t prepared for “gotcha” questions they encounter later.

At a Christian school, you’re presented with one argument. “Can you think of a better argument?” So later in life when a counter-argument surfaces, your whole world is thrown into shock.

Too often we tend to take a lot for granted when it comes to teaching our kids. Does their faith have real, deep roots that can withstand such challenges?

With no foundation, it’s inevitable that one’s moral fiber will erode. And Lambesis’s story illustrates this principle:

The first time I cheated on my wife, my interpretation of morality was now convenient for me. I felt less guilty if I decided, “Well, marriage isn’t a real thing, because Christianity isn’t real. God isn’t real. Therefore, marriage is just a stupid piece of paper with the government” …

So when I abandoned all belief in God, I had nowhere to put my feet. I was 30 years old and asking myself that same question, “Where does morality come from?” If there was no God, then morality is whatever I want to make it. That began to justify a lot of crazy behaviors in my life.

His thinking here is actually logically consistent. If God isn’t real, what is the point of morality? If it’s not anchored to any eternal, absolute truth, then moral decisions can simply be a matter of preference or convenience.

Lambesis makes similar statements about how he rationalized his way into using steroids.

While he never explicitly says so, the interview seems to imply that Lambesis is no longer an atheist.

I did fall flat on my face. I hit rock bottom. I lost everything. The trauma, the solitude: It made me the person I think they hoped I would eventually become. I know I have a long road ahead of me.

He also describes his journey as a “story of tragedy turning into redemption.” I hope that’s the case. But it’s a shame his life had to explode before that could happen.

It all began when the pressures and temptations of life revealed a faith without foundation, which led to a series of bad choices and compromises that ended with a prison sentence. Let’s learn from this story, and hope for a dramatic second act for Tim Lambesis.