You are here: Home / Archives for Alex Forrest Tim Lambesis was the frontman and leader of a Christian metal band called As I Lay Dying… until he was arrested for trying to hire a hit man to kill his wife.

The case garnered a lot of headlines. Shortly before he was sentenced, Lambesis participated in the first, and maybe the last, interview about what happened.

It’s a tale of hypocrisy, drug use, and infidelity, with possible hints of redemption. And there are a few things here worth considering: END_OF_DOCUMENT_TOKEN_TO_BE_REPLACED

I’ve also written on beauty here several times in the past (like this and this). The point of these writings was to make the case that beauty is an objective reality that is based in the nature and character of God.

In that vein, I came across an interview with a pastor named Brian Zahnd in which the subject was addressed in a really thoughtful, helpful way:

I talk about beauty being an interpretive lens for Christianity. The Greek philosophers spoke of the prime virtues of the true, the good, and the beautiful. Later, the church fathers identified these with attributes of God. But during late modernity, these prime virtues have been under pressure—modern man is skeptical about absolute claims pertaining to truth, goodness, and beauty.

Along with Christian apologetics and ethics, we need some Christian aesthetics. In a culture that is suspicious of our truth claims and less than impressed with our claim to a superior ethic, beauty may be a fresh way to communicate our message. Beauty has a way of sneaking past defenses.

I know very little about Brian Zahnd, but I really like what he says here about the need for the Church to become champions of beauty.

We spent many years in Louisville, KY, while I was doing MDiv and PhD work at Southern Seminary. While we were there we got involved with a new church plant being led by fellow student Daniel Montgomery. Though it started pretty small, today Sojourn is a large and thriving church with multiple campuses and an incredible music and arts ministry. We still miss it! A lot of that growth is the result of Daniel’s charismatic leadership and his outstanding Bible teaching. He’s honestly a brilliant guy with a vibrant heart for the Gospel, authentic Christian community, and the mission of the church. Though we moved away many years ago, I still consider Daniel a friend.

The book is a call to freedom through God’s grace:

Like a strong drink, God’s grace is intoxicating and dangerous. It simultaneously leaves you staggering and empowers you to stand. God’s grace not only declares us “not guilty!” in his presence, it changes our relationship with God—forever.

PROOF is an acronymn that stands for:

Have you read Proof? What did you think?

A thought-provoking start to the week: 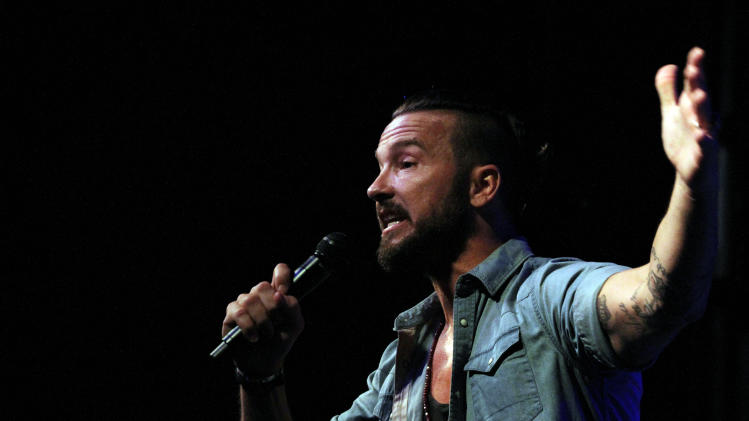 Is this the next face of American Evangelicalism?

Quick: Who are the biggest pastor celebrities in American culture?

For better or worse (and I’m leaning worse), American Evangelicals do tend to love celebrity preachers. Every “tribe” of American Evangelicalism has it’s superstar pastors – it probably doesn’t take you long to figure out who they are in your circles. There are a few whose fame moves into the greater American culture at large. Guys like Rick Warren, Joel Osteen, and TD Jakes come to mind. There are doubtless others whose fame extends beyond the evangelical world.

Like them or not, agree with them or not, these guys come to be regarded in the culture and in the media as default spokesmen for Christianity in our culture.

So maybe it’s time to meet Carl Lentz, because a lot of people are beginning to think he’s next.

Lentz is the 35-year-old pastor of Hillsong NYC, the American outpost of the pentecostal Hillsong church/movement in Australia. You’ve likely heard of Hillsong because of their music. He’s been described as “America’s Hipster Pastor” and “the next Joel Osteen.”

You can meet him in CNN’s profile here:

So there’s some things I like in this video, and there are some places where I’m not that keen. He’s clearly reaching people in an area where not a lot of churches have done so, but I’ve not heard enough of his preaching to know what he is teaching them. Is he wishy-washy with the Gospel? I hope not, but the cultural mainstream of our country is not typically enamored with people who are not. But let’s hang on to Philippians 1:18 here, either way.

Perhaps it was inevitable given his charisma and location, but Lentz has broken into the mainstream scene in this country. He’s chatted with Katie Couric on her show, and been photographed with multiple celebrities, including NBA star Kevin Durant and the mysteriously popular Justin Bieber.

I’m guessing we better get used to seeing him.

So… Have you heard of Carl Lentz? What do you think of him?