While on our planes to and from vacation I managed to read The Seven Checkpoints, by Andy Stanley and Stuart Hall. The book is written primarily for youth leaders and outlines a strategy for effectively teaching students over the course of their time in school. Stanley and Hall identify seven “checkpoints” that are the most important and critical issues facing teens:

These seven categories are obviously pretty broad, but they do cover a lot of ground, and are all certainly critical and relevant issues for teens. (The trick, of course, is that these are also critical and relevant issues for youth leaders, and everybody else for that matter…). The book is an easy read and full of practical advice and anecdotes that will be useful for those working with students.

I don’t know that I’m totally 100% on board with the Seven Checkpoints methodology though. Hall and Stanley recommend orienting basically all of one’s teaching and content around one of these seven principles, and planning a calendar around them accordingly. My only hesitation here is that it does not leave as much room for studies through particular books of the Bible or character studies. I think these kinds of studies are important because they will provide a better foundation in terms of doctrine and will also hopefully model for the students how they can get into Scripture themselves. My vision for student ministry would be very participatory in nature, including the way I would do teaching and studies.

That being said, the Seven Checkpoints is definitely worth reading and learning from. The seven areas they outline certainly need to be emphasized often. It’s refreshing to see a book on youth ministry that is more concerned with content than events and gimmicks. I think it’s a great book to hand youth workers.

The World Magazine blog (linked below) tells a story that is pretty scary:

Swedish pastor sentenced to one month’s jail for offending homosexuals

Stockholm (ENI). A Swedish court has sentenced a pastor belonging to the Pentecostal movement in Sweden, Ake Green, to a month in prison, under a law against incitement, after he was found guilty of having offended homosexuals in a sermon. Soren Andersson, the president of the Swedish federation for lesbian, gay, bisexual and transgender rights (RFSL), said on hearing the sentence that religious freedom could never be used as a reason to offend people. “Therefore,” he told journalists, “I cannot regard the sentence as an act of interference with freedom of religion.” During a sermon in 2003, Green described homosexuality as “abnormal, a horrible cancerous tumour in the body of society”.

Could that story out of Sweden portend things to come here?

I’m going to brush this post up (I hope) in the next day or two).

Some of you know that I have been in the fringes of what has been dubbed the “Emergent Church movement.” The church we currently attend is generally labelled as such also. Like any “movement” there is quite a bit of diversity. In short, emerging churches are typically labelled as “Gen-X” by marketing type people and usually are reacting against the excesses of the “Boomer” mega-church, with its slick marketing, slick services, watered-down user-friendly gospel, and consumer appeal. Of course I’m painting in broad brush strokes here. (There’s a book by Robert Weber called The Younger Evangelicals that dives into this if you’re interested (some of what he talks about is good, other parts are not).

Anyway, here’s a link to an article that appeared recently in the New York Times.

I’m going to return to offer some thoughts about this movement, some positive and some negative.

Louisville got totally rocked last night by crazy storms around 8 pm. There are still over 75,000 people in the area without power, 200 lines down, etc.

We have a friend who works at a high-end salon but cuts hair for friends after hours on the side. So I get a $40 haircut for $10. Cool. So last night Keri and I were at her apartment and she was cutting my hair when the power went out. She had literally just finished using the electric razor (thank goodness). So it would have been funny if I had a half-haircut. But she finished the rest with Keri holding a flashlight. It was pretty funny. But the storm was crazy.

In other bizarre news, The Automobile License Plate Collectors Association (OK raise your hand if you knew there was such a group…) awarded the new Kentucky plate with its Best License Plate Award for last year. The plate is controversial because some people, like us, for example, think it is stupid. It has a cheesy smiley face in the sun that just looks dumb. Many people alter their plates to cover the smiley sun up and there was a failed bid in the Legislature to re-do it.

To see the notorious plate and read the article, click here.

Apparently the Worlds AIDS Conference is in an uproar. It seems that the typical UN crowd strenuously objects to suggestions that abstinence education is the best way to curb the AIDS crisis in Africa. Of course UNICEF and such is all to ready hand out condoms and abort infants that might result.

Turns out that one country that is unique among its peers in successfully lowering its AIDS rate. In so doing Uganda stands in stark contrast to the rest of Africa. What have they done differently? They have promoted an abstinence-first policy towards sexuality. The government sponsored a ubiquitous publicity campaign where, with straight talk and little ambiguity they promote abstinence and “partner reduction.” The results are apparently staggering.

So at the big world AIDS conference, Uganda’s president comes out swinging, urging everyone else to adopt the same kind of measures. Ugandan President Yoweri Museveni challenged the politically correct policies promoted by the UN (and Democrats in Congress), saying: “I look at condoms as an improvisation, not a solution.” The article linked above (click on the title of the post) also tells the story of a Ugandan boy who gave up sex before marriage because he got the message.

But that message is just not PC anymore. Planned Parenthood and their UN and Democratic cronies will have none of that. Apparently sexual “freedom” is worth more than health and life. Doesn’t sound like freedom to me. It’s hard to understand why people just don’t get it. I suppose their eyes have been blinded and their hearts hardened (see Romans 1).

Here’s a quick explanation on why I appear in a sling in the picture below. Several years ago (in college) I began having problems with my shoulder – specifically, it had a proclivity to slide out of joint (partially) and quickly back in. It hurt. Over time that gradually became less common. In the last year, however, my shoulder began having different problems – mainly related to pain, decrease in my range of motion, etc. It got to where the pain was nearly constant and I couldn’t really lay down on my right side. So after consulting a couple orthopedists, we decided to have surgery. The stretching and tearing had taken quite a toll on the joint.

On June 8 I had an arthroscopic procedure where the doctor cleaned out a bunch of scar tissue (torn ligaments and cartilige) and bone spurs, and then tightened up the joints. They had to install a couple anchors (they look like caribbeaners in the pictures…. which I decided NOT to post!) to help hold the joint together. It will never be 100%, but this should improve it a lot and also eliminate most of the pain.

The surgery went well enough. Shoulder surgery is, they say, more painful then surgery on other joints. I wouldn’t know… but I believe them. I was popping a couple Viacadins every 4 hours along with a bunch of ibuprofin. The sling has been my companion for nearly a month now, though I can now take it off around the house (except for sleeping). I have worn nothing but button-down shirts for a month now (can’t get Tshirts on) and am not supposed to drive yet, so Keri has to cart me around everywhere. Hopefully some of this will change when I see the doc on Wednesday. I’m doing physical therapy, which consists only in light stretching and a couple isometrics for now.

So that’s the scoop on the gimpy picture. 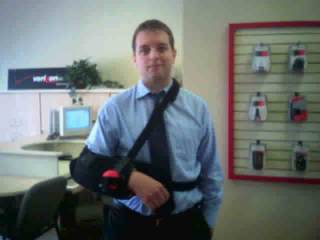 Here’s gimpy Alex in his sling